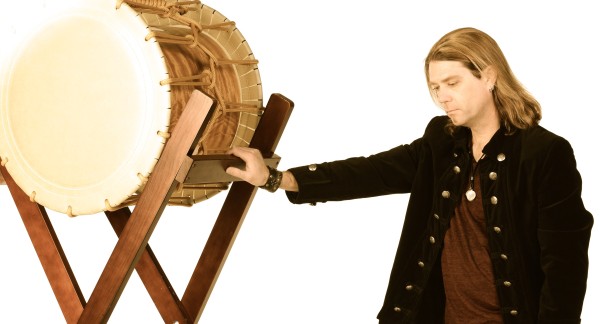 Tom Sharpe is a master of musical multi-tasking.
by Jamie Sotonoff, The Daily Herald

The Mannheim Steamroller drummer, acclaimed songwriter and Oswego resident is known for his high-energy, large-sounding performances on percussion instruments — sometimes playing several at once.
CDs/DVDs with Tom Sharpe’s music

“If you have your eyes closed and you’re just listening, you’re going to think there’s a lot more people up there than just me,” he said. “I don’t perform like anyone else. It’s quite a sight to see me pull it off. It’s, like, how many things can I do at one time?”

Sharpe’s been wowing audiences in shows around the suburbs these past few weeks as he debuts his new album, “Lifting the World: A Symphony.”

His next local performance is 2 p.m. Sunday, March 22, during the Des Plaines Public Library’s concert series.

The album, 10 years in the making, is the latest accomplishment in a music career that began when he won the prestigious John Lennon Songwriting Contest with the first song he wrote (“Like Setting Myself on Fire”) and was invited to perform it at the Rock and Roll Hall of Fame.

He went on to write music, and perform percussion and piano, all over the U.S., joining Mannheim Steamroller in 2007 as a drummer for its holiday tours. For the past seven years, Sharpe also was the drummer for former Styx frontman Dennis DeYoung.

Sharpe decided to stop touring with DeYoung this year so he’d have time to promote and perform his new album.

“I tried to keep all things (going) as much as I could, but some decisions had to be made,” he said. “This album, it needs to have a life now.”

Sharpe prefers to talk about the present, rather than his past with DeYoung. But he looks back with gratitude for the opportunity to play music that was “the soundtrack of people’s lives.”

“My role was, show up, play great, leave nothing in the tank, and go home. And I did that,” he said. “I think there is a misconception that having this kind of lifestyle is a big party, and, honestly, it’s a lot of hard work. It is a long day for those two hours on stage, so I made sure it counted.”

All the while, Sharpe was working on his own symphony, “Lifting the World,” which he recorded at his home studio and at a private studio in Naperville. The Elmhurst College choir is featured on the album.

Sharpe wrote, performed, mixed and mastered the entire album himself. “I allowed it to evolve and didn’t rush it,” he said. “I feel like I’ve really done the music justice. I am very proud of this work.”

The music doesn’t fall into a particular genre. It could be considered world music, classical or even rock. Sharpe describes it as simply “from my heart.”

“I almost feel like a vehicle for this music,” he said. “I’ve never felt that way. … I feel like I’m really doing what I’m meant to do, because I’m not following a formula.”

At age 44, Sharpe feels he’s entered a phase of his career where he wants to give back. He wants his music to connect with listeners and let them experience it in their own individual way rather than trying to convey a message. But he does convey a message — that anything in life is possible — during his regular music-filled presentations at school assemblies, clinics and conferences all over the U.S.

A native of Detroit, Sharpe came to Chicago to study music at DePaul University. Chicago’s been his home ever since. With so much of his “loud” life being on the road, he appreciates the peacefulness of life in the suburbs and plans to stay here.

“I plan to live to be 150. I have so much to do. And I’m just getting started,” he said. “A career in music really is a wonderful thing. You never know where it’s going to go. Mine has been a steady climb of things getting better.”

Jamie Sotonoff are always looking for people from the suburbs who are now working in showbiz. If you know of someone who would make an interesting column, email them at dgire@dailyherald.com and jsotonoff@dailyherald.com.