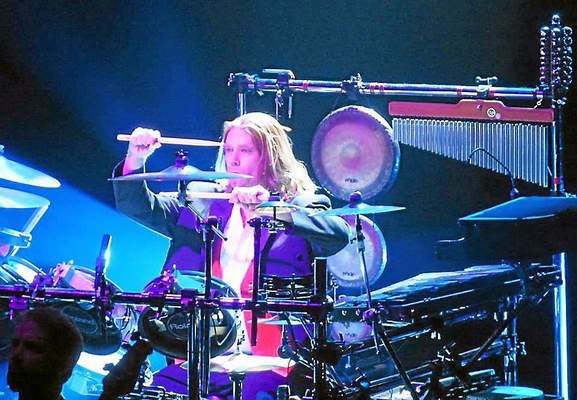 If he were just playing drums for former Styx frontman Dennis DeYoung and making his own music, Tom Sharpe would have a full plate. But the Detroit-area native says his six-tour tenure with Mannheim Steamroller has been one of the most rewarding endeavors of his well-decorated career.

“Who didn’t grow up with this music?” says Sharpe, 43, who was raised in a musical family in Washington Township and attended the Interlochen Arts Academy before getting bachelor’s and master’s degrees in music at DePaul University. “I was a 13-year-old kid putting up our family Christmas tree with Mannheim Steamroller playing in the background. Their approach to that music was so revolutionary and fresh.

“So it’s an amazing thing to be on this side of it and to be on that stage. People start to hear that you’re going to play ‘Deck the Halls’ and they’re clapping and going crazy. To be part of that group that’s giving all these people so much joy is a really special experience.”

Sharpe — who won the John Lennon Songwriting Contest’s World Music Song of the Year for “Setting Myself on Fire,” the title track of his debut CD — also performs on Mannheim Steamroller’s new album, “Christmas Symphony II,” and hopes to release his second album, a self-titled, symphonic effort, in 2014. And he has a passion for motivational speaking and encouraging music students through his own story and observations about the music industry.

“I want to give back at this point,” Sharpe explains. “I like to speak to kids and perform for them, and I’m trying very hard to show them that if you stay true to what you believe, there’s a steady build to it and you have to balance patience and persistence and just stay on your road and not be discouraged if the road is a bit longer than you’d like.

“I look at it as, ‘Here’s an opportunity for me’ and I’m trying to craft something to inspire other people. I don’t need any more stuff at this point. I just need to be looking at how I can take these things that have happened to me and use them for the greater good.”