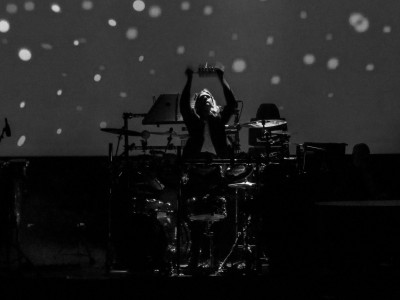 My music is instrumental, blending orchestral and rock with an ethnic flair. Chip has influenced me from a wider perspective. He’s not only had huge success, but has done it the right way. He’s a kind heart. He cares for his musicians, and he’s a role model to me.

BY JEFF ELBEL | FOR SUN-TIMES MEDIA

Percussionist and composer Chip Davis founded Mannheim Steamroller in 1974. Although Davis experienced great success with the first several gold-selling albums in Mannheim Steamroller’s “Fresh Aire” series, 1984’s “Christmas” skyrocketed to multiplatinum status and became a cultural phenomenon. The album’s rocked-out version of “Deck the Halls” has been heard in public spaces during every holiday season since its release.

Davis remains the mastermind and orchestrator of his musical empire but no longer tours as Mannheim Steamroller’s drummer. Since 2008, local musician Tom Sharpe from Oswego, has anchored one of two traveling companies in Davis’ place. Sharpe and his teammates will raise the Christmas spirit in Rosemont on Dec. 20.

The gig is special to Sharpe, who grew up with the music. “I remember trimming the tree to the first Christmas album in 1984,” he says. “I am always very careful about the legacy that Chip created.”

Classics including “Chocolate Fudge” will appear in the “Fresh Aire” program. Sharpe cites “Toccata” from “Fresh Aire III” as particularly fun to play. “It’s in five/four time, with a big, sweeping spectrum of sound,” he says.

Sharpe performed on 2013’s “Christmas Symphony II” album, which included perennials like “Joy to the World” and “Carol of the Bells.” “I’m completely honored and feel very blessed,” he says. “I know that people will be listening to it the same way I did as a kid. The idea that young people may see me the same way I saw the musicians that inspired me is very special.”

Aside from Mannheim duty, Sharpe is a bandleader and composer himself. His symphony “Lifting the World” recently arrived on CD and will be performed after the current tour. While Sharpe’s music shares threads with Mannheim, he says the influence is indirect.

“Even before touring with Mannheim, it was a common comparison,” says Sharpe. “My music is instrumental, blending orchestral and rock with an ethnic flair. Chip has influenced me from a wider perspective. He’s not only had huge success, but has done it the right way. He’s a kind heart. He cares for his musicians, and he’s a role model to me.”